The Great Resignation Is About This ‘Dream-Job Elixir’ 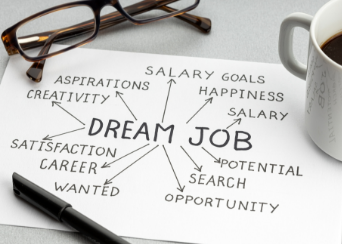 Everyone seems to have an opinion about The Great Resignation and why so many people are leaving their jobs in recent years. Some reasons are tied to the pandemic, such as greater demand and acceptance of remote work following lockdowns. Other causes were relief or backlash from decades-long repressions: an influx of deferred retirements or employers neglecting to keep workers engaged and pay them adequately in proportion to overall productivity.

Whatever the reason, any ability for people to switch jobs or change careers emboldens them with a sense of control in response to things they can't fix: a bad boss, a global pandemic, capitalism, or whatever's to blame.

The Power of Control

According to experts in social psychology and organizational management, people's capability to control their circumstances has a profound impact on their lives, "to roughly the same extent as having a sense of purpose, social connectedness, and even financial security," wrote professors Amy Cuddy and Nicholas Pearce for the Washington Post. "One path to recovering personal power is to act decisively in ways that can change our lives -- by quitting our job, for example."

You might be ready to go all in by joining the recent labor movement and leaving your job. You could join the "quiet quitting" trend and dial back your efforts at work by setting personal boundaries on your job. But these are ways of resigning yourself to your situation. Your idea of control might mean doing something different -- not doing something less, or not at all.

Control is what Georgetown University computer science professor Cal Newport calls the "dream-job elixir." In his career advice book, "So Good They Can't Ignore You," Newport wrote that "a position's potential autonomy (is) as important as its offered salary or the institution's reputation."

According to Newport, people need to develop and apply rare and valuable skills, which he calls "career capital."

"If your goal is to love what you do, your first step is to acquire career capital," Newport wrote. "Your next step is to invest this capital in the traits that define great work. Control is one of the most important targets you can choose for this investment. Acquiring control, however, can be complicated."

Newport identified two "control traps." The first is when you pursue more control in your working life before you have sufficient career capital to offer in exchange, and the second is when you have the career capital but your employer will fight your efforts to gain more autonomy.

One tactic that institutions might do is saddle candidates who lack career capital with overwhelming amounts of teaching and service responsibilities with the allure of an autonomous academic life. Whereas, you might have stores of career capital in the form of peer-reviewed publications, but an institution, especially one with a well-established program, might not need new faculty to shape its direction, and they could stifle control or make tenure more difficult.

Rather than subscribing to lifestyle design or job crafting, which can be effective ways to reinvigorate your career with a sense of control without switching jobs, Newport offers a solution he calls the "law of financial viability."

"When deciding whether to follow an appealing pursuit that will introduce more control into your work life, ask yourself whether people are willing to pay you for it," Newport wrote. "If so, continue. If not, move on."

Newport applied this law as he was considering an interview request from a state university before accepting Georgetown's job offer.

"Ultimately, this was the law that helped me finalize my own career decision," Newport wrote. "Georgetown offered much great potential for control over what I did and how I did it ... (and) they were willing to pay me well for this move toward autonomy."

Control is More Than Money

It's easy for Newport to say this because he acquired the career capital and his law sounds like basic economic principles of the job market. But using money as a neutral indicator of value -- are people willing to pay you? -- corrects for relying too much on your emotional attachment to your ideas or the praise you get for your work from other people, which comes at no cost to them.

Money isn't the only indicator of value. If it were, higher education professionals would be striving to work in other industries that offer the highest salaries possible, and institutions would rank everyone according to how much revenue their departments or programs generated. Mission and societal benefit still matter. But money, as well as time, energy, and other resources an institution is willing to expend, is important feedback.

An institution might desire certain skills or services, but are they willing to outsource it, hire a consultant or vendor, or make it part of a job description in their open positions? Control might be doing what you want and how you want to do it, but real control means also leveraging what others need you to do. In other words, you want to control something that is worth grasping.

Higher education professionals are better positioned to exploit the demand for talent in the aftermath of The Great Resignation. Those who take control of their careers, not necessarily a bag of money, and mix in the antidote to their institution's greatest problems, hold a potent elixir that can lead to a dream job.

Disclaimer: HigherEdJobs encourages free discourse and expression of issues while striving for accurate presentation to our audience. A guest opinion serves as an avenue to address and explore important topics, for authors to impart their expertise to our higher education audience and to challenge readers to consider points of view that could be outside of their comfort zone. The viewpoints, beliefs, or opinions expressed in the above piece are those of the author(s) and don't imply endorsement by HigherEdJobs.
HigherEd360 is part of the HigherEdJobs network.