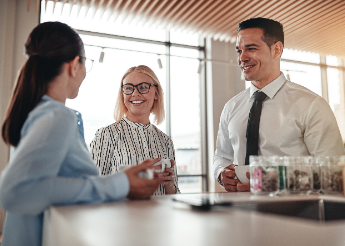 Are you eager to tell people where you work? If you work in higher education, chances are you will see conversation starters such as "So, what do you do?" as an opportunity to brag about your profession and your institution. You might even stand taller or expect admiration from the listener.

You're more likely to see a bumper sticker, sweatshirt, or porch flag showing a college's logo than those of, say, an insurance company or a tech firm. People are proud of their colleges and universities. Students and alumni have school pride, but more so should the employees who often invest more time on campus in a lifetime. Sure, a lot of recognition and pride is directed at the sports teams that represent the institutions, but sports provide an example of the effects of pride.

In his book "The Best Place to Work," psychologist Ron Friedman wrote a chapter titled "What Sports, Politics, and Religion Teach Us About Fostering Pride." One can argue that higher education belongs on that teaching list as well.

Friedman makes the case that pride in one's workplace has a positive effect on employees' job performance and loyalty, and it enhances the organization's reputation that helps to recruit future talent or clients. "It's one thing to enjoy working at a company and quite another to feel proud of it," Friedman wrote.

Pride is derived from social status and an individual's standing within a group. People who associate with groups in the domains of sports, politics, and religion are provided status-conferring benefits that spark pride.

Friedman identified four "building blocks" of workplace pride using analogies to sports, politics, and religion, but they can also be applied to higher education:

1.) A Grand Narrative
People who work at colleges and universities have compelling stories to tell about their institution's future and past. According to Friedman, religious institutions, political parties, and sports teams all unify their members around a shared inspirational vision of success, whether that's entering heaven, reforming a tax system, or winning a championship.

"Each group offers its followers a reason to view their membership as an investment - one in which their status will be elevated," he wrote. Higher education's ability to shape students' futures through their transformative college experiences induces pride in members of the campus community.

Reflecting on the past also emboldens status within a group. Historical reverence of an institution's storied tradition has a profound effect on loyalty. It's why the New York Yankees wear pinstripes, the Bible is filled with historical events and genealogies, and political leaders reflect on the nation's past in speeches and, at least for one former U.S. president's campaign slogan, to Make America Great Again. It's also why campus buildings are redbrick, white-trimmed Georgian buildings, as a nod to a real or imagined colonial past, and people sing their school's alma mater at football games and commencement ceremonies. This gives people a sense that they are part of something bigger -- often literally with the high-ceilinged cathedrals -- and makes membership feel more meaningful.

2.) Group Distinctiveness
Pride comes from having a clear point of differentiation. People think their institution is so much different from their competitors. It's how schools market themselves but also how workplace cultures are defined.

You hear comments like "This is the way we do things around here," or "We're not like that other university up north." But a lot of universities wind up with the same mission statements and sets of values, and the only differences are often the names and school colors. The differences between sports or political rivals, as well as the factions within the church and all its denominations, is what Sigmund Freud would call "the narcissism of small differences."

According to Friedman, how groups define distinctiveness is less important than the fact that it has something that its members find meaningful. If Republicans and Democrats thought of themselves as all the same, then they would stop taking pride in their membership.

3.) Commitment to the Greater Good
A sense of mission is an easy pride booster in higher education. Many professionals in academe turn away from industry, and often higher-paying jobs with better hours, so they can work in a job that improves the lives of others.

Religious groups and political parties believe what they do benefits society and, as Friedman observed, "even sports teams often frame their desire for winning around the implications their success will have for their schools, their fans, or their cities."

When companies in other industries attempt to instill workplace pride through organizational altruism, they volunteer in the community by helping children and young adults or they contribute to college scholarships. Higher education professionals experience this societal benefit much closer in their daily jobs.

"When there's a visible link between our identity and our work product, our performances become reflective of who we are," Friedman wrote.

Each group member matters in religion, politics, and sports when it comes to spreading the Gospel, making your vote count on Election Day, and supporting your team on game day. Colleges and universities emphasize things like shared governance and one-on-one interactions with students that make faculty and staff feel like they matter and they are contributing.

The Downside of Pride
So far we've looked at building blocks and how pride benefits professionals and their workplaces. But there are darker sides of pride, including a different type of pride and a reverence for one's vocation that both can be harmful to workers, especially those in higher education.

Hubristic Pride
Pride can be both a good thing and a bad thing in the workplace. According to Friedman, there are two types of pride: authentic pride, which is the positive, achievement-oriented pride that builds workplaces up, and hubristic pride, the narcissistic version that we think of when referring to pride as one of the seven deadly sins.

"When our pride is authentic," Friedman wrote, "we don't feel the need to boast, act cocky, or show off. We become more confident and altruistic, growing our status not by dominating others but by sharing our knowledge and earning others' respect."

Hubristic pride, on the other hand, leads to less cooperation, aggressive behavior, intimidation, and applied force based on status, as well as other negative outcomes of a toxic workplace.

The difference lies in the way people interpret the causes of success. Authentic pride is the belief that success is about what you do, not who you are. Hubristic pride and displays of self-promotion are the result of insecurity when your status is threatened.

Vocational Awe
You can go too far in the grand narratives you tell yourself about your job, how you are supporting the greater good, and how what you do is distinct. You can be exploited by your blind faith in these building blocks and having too much workplace pride, which could lead to a lower salary and burnout. It's called "vocational awe." Fobazi Ettarh used this term to describe the set of ideas, values, and assumptions librarians have about themselves and how they believe that libraries are inherently good, sacred places that are beyond critique. The same applies to all higher education professionals and colleges and universities in general.

"Because the sacred duties of freedom, information, and service are so momentous, the library worker is easily paralyzed," Ettarh wrote. "Awe is easily weaponized against the worker, allowing anyone to deploy a vocational purity test in which the worker can be accused of not being devout or passionate enough to serve without complaint."

Your workplace pride should not turn to shame if you decide to ask for a raise or take a mental health day. This applies to higher education professionals feeling shamed by not tirelessly serving students and forsaking their own well-being, but also those working in professions who serve teammates and fans, members of a church, or voters and constituents.

In Conclusion
As higher education professionals, we have a lot to be proud of -- the work that we do, the history of our institutions, our distinctiveness -- but we can't be arrogant or awestruck by our vocation. Use your workplace pride for building each other up, not diminishing yourself and others.