Change Your Luck by How You Look at Your Career 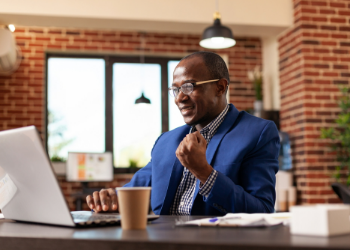 Career advancement, or lack thereof, is often attributed to luck. Whether it's a chance encounter at a conference that leads to a job offer years later, or having your resume or CV grab the attention of a hiring manager among hundreds of other applications, it helps to simply be in the right place at the right time. Higher education professionals often credit, or blame, luck for their career success and failure despite many being trained to analyze data, recognize variables, and think rationally.

One recent study that surveyed academic employees on temporary contracts in the United Kingdom found that these higher education workers attributed luck as a determining factor in their careers, rather than hard work, because they recognized their lack of agency.

Luck is an easy explanation. Employers screen a lot of applicants -- 250 per job opening is an oft-cited estimate -- and the odds of being hired might seem similar to winning the lottery. There's a running joke that hiring managers should throw away half of the applications without looking at them to avoid hiring anyone who is unlucky. But getting the job is not all about a rabbit's foot or even already having your foot in the door.

The way you think about luck might have an effect on your career outcomes.

Measuring the way people think about luck is difficult because perceptions of luck can vary: it can be viewed as chance, an innate quality, or some supernatural force. Happiness, a word etymologically rooted in luck and fortune, also plays a factor. A recent study published in the journal Current Psychology concluded that happy people don't necessarily believe in luck as a non-random, deterministic, and external phenomenon, but they are more likely to consider themselves personally lucky.

Perhaps you've read inspirational quotes about "creating your own luck" or how luck is the result of "preparation meeting opportunity" and you truly believe in self-determination. Whether or not you are a happy person or you have a heightened locus of control, you might be a benefactor of luck simply from awareness, that is, being open to new experiences and the potential for chance encounters and opportunities.

British psychology professor Richard Wiseman, author of "The Luck Factor," conducted a 10-year study of both people who considered themselves lucky and unlucky. He had participants count photographs in a newspaper. The lucky people completed the task in a few seconds while the unlucky people took an average of two minutes. That's because the second page contained an advertisement next to one of the photos that said "Stop counting - there are 43 photographs in this newspaper," and another one midway through that said "Stop counting, tell the experimenter you have seen this and win $250." The unlucky people missed the opportunity because they were too busy counting photographs.

To Wiseman, there's more science to the nature of luck than the power of positive thinking.

"It is about encouraging people to move away from a magical way of thinking and toward a more rational view of luck," Wiseman wrote.

In 2003, the year he released "The Luck Factor," Wiseman told Fast Company that people "have far more control over events than we thought previously. You might say, 'Fifty percent of my life is due to chance events.' No, it's not. Maybe 10% is. That other 40% that you think you're having no influence over at all is actually defined by the way you think."

So what does all this mean for you as a higher education job seeker? Should you scour content on HigherEdJobs until you notice a posting that says "Stop searching, tell the recruiter that you know so-and-so and you'll get the job."? No, not quite.

Identify your unique combination of talents to offer institutions. Be open to opportunities and avoid getting stuck in a routine job search.

Sure, luck is somewhat of a factor in everyone's career. But you're not entering a sweepstakes to win a spot on an assembly line to do the same thing that anyone else can do. The key is to avoid looking at your career with the singular focus of climbing a ladder and taking the same steps that others in your discipline are trying to do. Instead of climbing a ladder, as author Marcus Buckingham advises, think of your career as a scavenger hunt.

There are many different ways to find your way and when you reach a desired outcome or ideal job, you can credit all the steps taken along your journey in hindsight as simply being lucky, when actually there was more to it than that.