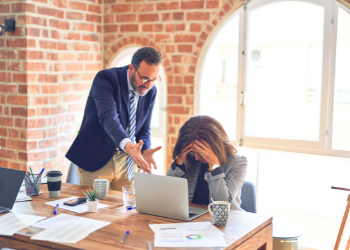 It's not just kids who can fall prey to bullies, as many professionals in the higher education industry know too well. "Like racism and sexism, workplace bullying is a structural problem woven into culture. Consequently, the most vulnerable populations that lack comparable power are often the most affected when bullies rule the campus." Dr. Leah P. Hollis, professor, diversity expert, and healthy workplace trainer, writes in her new book "Human Resources Perspective on Bullying in Higher Education."

Dr. Hollis' research reveals that 27 billion dollars is wasted annually because of the cultural disruption and turnover caused by workplace bullying. October is National Bullying Prevention Awareness Month, our annual opportunity to examine the problem of workplace bullying.

How common is bullying in the higher education workplace, and why would something so contrary to the missions of our institutions take root there?

Bullying in Higher Education
Dr. Hollis finds that nearly 60 percent of higher education professionals have been impacted by bullying during their careers. Some employees are more likely to experience this brutal behavior than others. "Women and people of color proportionally endure workplace bullying at higher rates because they often do not hold the more powerful positions on campuses." Dr. Hollis explains. "Workplace bullying with its cadre of health-harming and unwanted but costly business outcomes is four times more prevalent than the workplace discrimination that is prohibited by law."

The Workplace Bullying Institute's (WBI) 2021 report measures instances of workplace bullying across industries. WBI also finds that women are more likely to be targeted than their male colleagues: "The majority of bullies are men. Male perpetrators seem to prefer targeting women (58 percent) more than other men (42 percent) . . . Women bullied women in 65 percent of cases."

The Problem of Workplace Bullying
Dr. Hollis points out that in higher education, workplace bullies "often hide in plain sight." When a bully is actively preying on colleagues, other employees, including those in HR, tend to know. Stories abound, and a scent of toxicity reverberates through the culture. Employees may recognize, for example, that there's a department with a negative reputation and a higher degree of turnover than others.

So why is it tolerated? Why does a bully's behavior get explained away:

"That's just how that professor operates."

"The provost is brilliant but brutal."

[I]f an organization knew of a thief on staff who was stealing and destroying resources, the organization would probably order an urgent investigation, resulting in a swift discharge of the thief for vandalizing university property and embezzling the resources. This miscreant would likely face criminal charges and would be sanctioned to reimburse the university for the damage. However, organizations do not engage the same urgency when employees report that a bully is damaging human resources or stealing their creativity and innovation. Employees are the single most important resource any organization can possess. Yet, organizations remain inert in the face of workplace bullying regardless of the high cost of recruiting, training, and retaining valuable employees.

A healthy professional culture is a key selling point for attracting and retaining staff. Every interviewee asks about culture. Along with salary and benefits, it's a core feature when it comes to attracting new recruits and maintaining existing staff.

No institution can afford to harbor a bully, no matter how talented that person may be. One employee simply can't bring enough value to be given license to perpetually disrupt culture and rob it of future talent. That's a losing business model.

What Needs to Change
Employees who are getting bullied at work need real help to dislodge them from the abusive relationship in which their employer has ensnared them. Dr. Hollis writes: "Some colleges and universities have developed anti-bullying policies. However, for human resources personnel to enforce such policies, the leadership must sanction such engagement." What if those leaders are the bullies?

Employees need laws that come from outside of their institutions to ensure their protection. Dr. Hollis notes that other countries have these protections as do five U.S. states (California, Maryland, Minnesota, Tennessee, and Utah). For most employees, though, they have to try to work with existing structures that protect employees from discrimination rather than workplace abuse.

The civil rights nondiscrimination laws which compel employer policies that prohibit harassment and discrimination technically apply to same gender cases. In other words, a woman may claim sexual harassment by another woman coworker or boss. But it is extraordinarily difficult to prove that the underlying animus for mistreatment was the other person's gender. Given that difficulty, HR compliance officers routinely discourage same-gender complaints, for both men and women. Likewise, it is nearly impossible to find an attorney willing to take a same-gender harassment case.

What's at Stake
Many professionals are drawn to higher education because these institutions do important work and embrace valuable missions. These are jobs that we can feel good about doing. But bullies steal that too when they create cultural toxicity.

Dr. Hollis writes: "The higher education sector claims to embrace women and people of color. Institutions hire deans, provosts, and president showcasing their track record of supporting underrepresented faculty and student groups. . . With researchers confirming that workplace bullying is a gendered phenomenon, those who engage in bullying that hurts women and people of color are not only operating outside of the stated rules of the bureaucracy, but also jeopardizing the stated mission of collegiality, inclusion, and collaboration."

Dr. Hollis points out that the past two decades have seen decreasing numbers of minority faculty members.

Workplace Bullying is Bad for Business
Dr. Hollis' survey of higher education professionals who were bullied at work finds that 75 percent "stated the organization did nothing to curtail the bullying on campus." About 30 percent quit their jobs, while nearly 60 percent continued to be abused at work for two years or more.

Working to further legal protections stands to help those who are abused at work. Seeking training for leaders and HR teams, so that they can incorporate transparency and reporting measures, also stands to help create accountability for bullies.

Workplace bullying is not just cruel, it's also bad for business. It negatively impacts an institution's brand. It drains resources and morale. It signals that the institution has a leadership problem. Employees who serve the higher education industry deserve better.