Parents: The Next Protected Class? 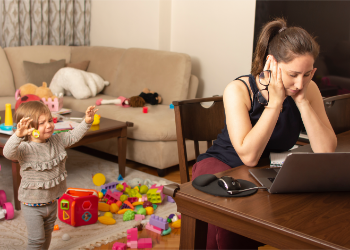 Recently we lost a media giant, Betsy Wade, who had an illustrious forty-five-year career at the New York Times. Before her job at the Times, she worked for The New York Herald Tribune. She was fired in 1952 when her supervisors learned she was pregnant. They determined that they did not want to pay maternity leave. Today, firing someone for pregnancy is against the law. Still, there are other ways that we penalize parents, particularly mothers, forcing them to choose between career and family by putting them in untenable positions forcing us to ask, are parents the next protected class?

While COVID-19 has disrupted parents' work and life patterns across the U.S., it has hit women harder, particularly those who now find themselves unemployed. According to the Census Bureau, in an article titled "Working Moms Bear Brunt of Home Schooling While Working During COVID-19," one data point showed that "of those not working, women ages 25-44 are almost three times as likely as men not to be working due to childcare demands." These are the women who gave up jobs or were let go as an outcome of the pandemic.

In addition to parenting school-aged and younger children, women are also more likely to be the front-line caregiver of an aging parent. In these instances, remote work is often the only way of ensuring that the parent's health is not in jeopardy. For this reason, many faculty and college employees who can work from home do so, even if there's a preference to be on campus.

Surprisingly, higher education (certainly with some exceptions) is not at the forefront in finding structural solutions. This crisis can negatively impact the career advancement of women for decades to come. Why are some colleges managing this so poorly, providing only one-off solutions? Concerns over productivity declines have arisen. I would argue these concerns miss the opportunity to build employee morale and loyalty by removing stressors. This hyper-focus on micromanaging assigned time takes the attention off of what's important -- healthy employees and a positive climate, coupled with productivity. Another unfortunate matter is that some workplaces marginalize parents and caregivers by holding back opportunities that lead to their advancement and professional development. It can feel as if one is being penalized for missing the dean's meeting because they have to get a child off the school bus or ensure that their elderly dad makes it to the neurologist. Flexing a work schedule can go a long way in relieving some of the stressors parents of school-aged children and elder care-providing employees face as they juggle competing priorities.

Some romanticize the stay-at-home experience but, trust me when I tell you, working from home is no walk in the park when one is a caregiver. Going to work allows employees to focus on one thing at a time, with minimal distraction. Yet, despite the distractions at home, some of us in higher education administration seem to be learning that productivity can happen beyond the constraints of 9 a.m. to 5 p.m., mainly because students need services beyond said hours. The unfortunate aspect is that we have entered a time where the job demands are 9 a.m. to 5 p.m. and beyond, a fact that predates the pandemic.

There's no prevailing structural solution being applied across the industry, so institutions determine how to approach this employee relations matter in very diverse ways. Sometimes, how these concerns are approached is dictated by the personality and preference of the institution's president. In the same town, two colleges can take wildly divergent approaches leading to differences in how supported employees feel at one college, while feeling underappreciated at the other. Some of these differences in approach are generational. The Greatest Generation and Boomers look at things differently than Gen Xers, and indeed, all three approach this issue differently than Millennials. There is a body of pre-pandemic research on the difference in organizational culture and the occasional conflict developed based on generational differences. These divergent views have been exacerbated, post-pandemic, with workaholics battling it out with work-life balancers. Women in their 30s are told by women in their 50s and 60s that "they know what it's like to raise children and work simultaneously, and that it can be done." Agreed, but the question in reply is, did you raise those children during a global pandemic? Did you, too, have to juggle putting your tenure packet together, disbursing financial aid to thousands of students, or leading a capital campaign, while also teaching third-grade math to your eight-year-old? If not, then my advice would be to listen more and compare less. The general rule of thumb is, if you raised children in an off-pandemic year, you really can't relate.

Once beyond the generational differences, we have to contend with the gender differences and fall-out that will turn the clock back on the progress made in career advancement for women in higher education. Using the previous example, if you have to leave before the dean's meeting concludes or miss it altogether, the stress that is felt about how you are perceived and what you may have missed can be monumental. This angst is particularly daunting if most (not all) of the men have the luxury of staying until the end of the meeting. The situation can be worse if you are fully remote and have to deal with the worry that male colleagues are resentful that you "get a pass" because you have a child and, as such, get to "opt-out of coming to work." To that, I know many who would say come on over to my place on any given pandemic, at-home school day, and you will learn what work is! No remote employee overseeing virtual learning for their children while working is relaxing from 8 a.m. to 3 p.m.

Add all of this up, and you have parents and caregivers who are grateful that they remain employed yet stressed out with fear of losing their jobs. They are concerned about being perceived negatively by both colleagues and supervisors alike. They also wonder if they are meeting the amorphous productivity levels dictated by human resources and missing content from important meetings. They question whether they have been left out of crucial decision-making or special projects. Even worse, they wonder whether they are missing the signs that their job is on the line for all of the above.

If this is your reality, it may be almost preferable to have a government mandate requiring everyone to stay home from work. It at least takes the pressure off and helps you not feel like a complete failure at work, or home-schooling your kids, or by being an insufficient provider to a beloved parent (we are our own worst critic). With most of the colleagues at your institution joining you in the virtual space, the playing field would once again be closer to level. This change wouldn't lighten the caregiver's responsibilities at-home, but it can ease some of the guilt, insecurity, and defensiveness that drives the overcompensation and feelings of under-appreciation. While a government mandate might be the right solution for our mental health, it's not really the best solution for the economy. What we need is for the best and brightest minds inside and outside of the academy to help develop structures that support women, caregivers, and parents of all genders and gender identities through these challenging times. Feeling less overwhelmed, we can get back to what matters most -- teaching, learning, living, and serving.